Return to About Legion 133

The History of the Port Coquitlam Legion

On April 10, 1917, representatives of 147 Veterans associations met in WINNIPEG to form the GREAT WAR VETERANS ASSOCIATION. A year later in 1918, the Federal Government summoned an advisory Committee from the GWAC to advise it on how best to absorb returning soldiers into civilian life. The GREAT WAR VETERANS ASSOCIATION invited five other groups to form the DOMINION VETERANS ALLIANCE in an effort to lobby for joint concerns of WWI veterans in 1922.

Issuing a declaration of principles that calls for veteran’s unity, in 1923, EARL HAIG, head of the BRITISH EMPIRE SERVICE LEAGUE proposed that his organization will hold their next conference in Canada to help promote unity. The BESL Council was invited to Canada in 1924 and they came to Ottawa in June 1925, joining with 3000 Canadian veterans in conference.

THE CANADIAN LEGION OF THE BRITISH EMPIRE SERVICE LEAGUE

At the Canadian conference in Winnipeg November 25, 1925, ten Veteran’s organization and 50 independent regimental societies and clubs drafted a constitution for the CANADIAN LEGION OF THE BRITISH EMPIRE SERVICE LEAGUE. Sir Percy Lake was elected as its first president.

In 1960, the Queen granted the name change to THE ROYAL CANADIAN LEGION. Branch #133 of The Legion was originally formed in 1917 under the Great War Veterans organization. Its first president was CAPT. JONES with meetings held in an old Shack on the corner of Kingsway and Schoolhouse Road (Mary Hill Street now). This unit disbanded in 1921 for financial reasons.

In 1924, a group of veterans from this organization applied for and received their Charter as THE EARL HAIG branch of the GWVA. This time the group met in an old building at the corner junction of SHAUGHNESSY and LOUGHEED HIGHWAY. The branch was not licensed but was permitted to hold a “Smoker” once a month at which alcoholic beverages were available.

Once again, the branch disbanded in 1930; also as a result of financial problems caused by the world-wide recession. The President at the time was Mr. A.G. MILLARD. The Millard family is considered PIONEERS in Port Coquitlam. Mr. A.R. MILLARD is recorded as the first logger in this area. His gang logged along the COQUITLAM and PITT Rivers and on BURKE MOUNTAIN about 1900. MILLARDS were prominent merchants in the small community of WESTMINSTER JUNCTION, now the City of Port Coquitlam. They owned and operated a General Store, a Hardware Store and a Liquor Store.

In 1934, the group CHARTERED again under the Canadian League of The British Empire Service League with another pioneer family name, ARTHUR MARS, as its president. His brother, JAMES MARS was our first MAYOR. The meetings of the branch were held in the ELKS HALL until 1946 when they acquired the McLean House on MARY HILL and PITT RIVER ROADS. They had acquired the McLean property in 1934 but did not complete the renovations until moving in 1946 when it was named as LEGION HALL. 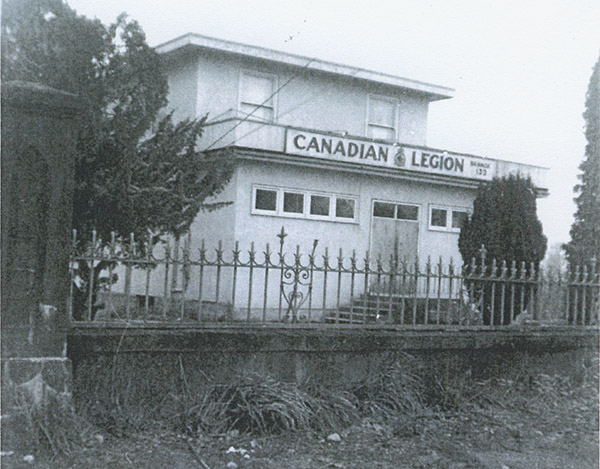 The aging structure burned down March 17, 1978 leaving the Members of the now, ROYAL CANADIAN LEGION, BRANCH #133 without a meeting hall.

The members soon acquired sufficient space at McAllister Plaza and were there until 1984 when they acquired land at SHAUGNESSY AND KINGSWAY and built a new Legion on that site. 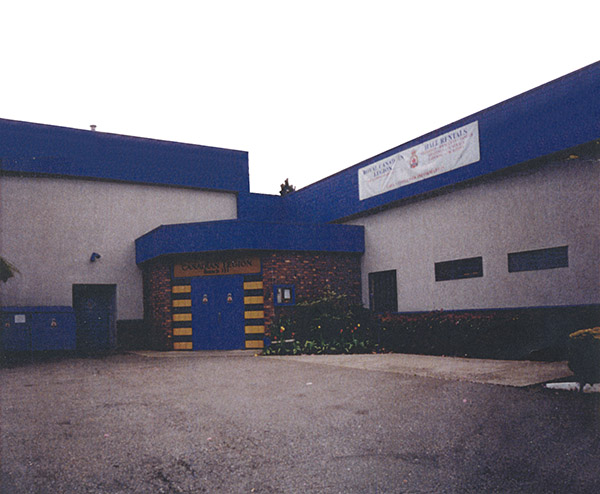 The first Royal Candian Legion building at Shaugnessy and Kingsway.

In 2005 the building was demolished to make room for a four story, fifty-four unit Seniors Residence and Legion premises, which opened in 2008. 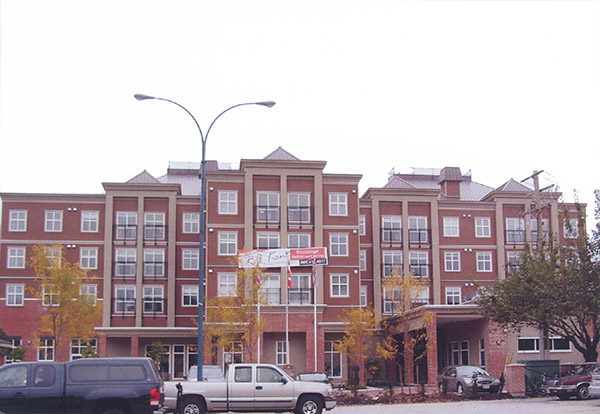 The current Royal Candian Legion building at Shaugnessy and Kingsway.

The Ladies Auxilliary did not receive their Charter until 1938 and have been an important part of Branch #133 since. The first President of the Ladies Auxiliary was Mrs. Thomas Routley. The Routleys were another pioneer family – William Routley built the MINNEKHADA HOTEL (later renamed to the WILD DUCK INN) and operated it for many years. Mrs. Thomas Routley was also President of the Port Coquitlam’s Women’s Institute and was responsible for organizing the first Community MAY DAY in 1923. A grateful community has named Routley Avenue and Routley Park on Western Drive for the family.

Today, in 2012, the 600 member strong Branch #133, continues to serve its constituents, seniors and the community. The annual POPPY campaign receives significant donations all of Which goes back to the Community in the form of Bursaries, Grants Donations and aid to Veterans and returning soldiers of the AFGHANISTAN conflict. As well, funds raised through other Legion activities are funneled back to-various groups within the Tri-Cities area.

In 2011, more than $70,000 was distributed in bursaries to 8 post-secondary school students, and a variety of other donations going to such groups as the EAGLE RIDGE HOSPITAL FOUNDATION, SHARE SOCIETY, CROSSROADS HOSPICE FOUNDATION, PORT COQUITLAM HERITAGE SOCIETY, THE WILSON SENIORS CENTRE, etc.

THE POPPY CAMPAIGN, is of course, the lead up to REMEMBRANCE DAY, on NOVEMBER 11″‘. A solemn ceremony is conducted at WILSON CENTRE on that day, with a march to the CENOTAPH in VETERANS PARK in front of the CITY HALL.

This granite memorial displays the names of our citizens who served their county and town in WORLD WAR I, WORLD WAR II and the KOREAN WAR. The Legion has undertaken an initiative to identify as many of these persons as possible.

Our research started with W.L. RAYNES, a casualty of WW I. WALTER LIVINGSTON RAYNES was born November 03, 1881 in Saint John, NB. Educated there and at McGill University in Montreal, he first appears in B.C. in the 1911 census at NANAIMO, where he was serving the Presbyterian Church as a Minister. In 1913, he shows up as the Minister of the Church in Port Coquitlam on Dewdney Trunk Road near Shaughnessy (close to the present site of the LEGION).

On May 30, 1915, the Minutes of the Session Meeting of the St. Andrews Presbyterian Church records, Rev. Raynes requesting a leave of absence. It was granted, primarily because the church did not have the money to pay his salary. Walter travelled to Montreal and enlisted in the Canadian Army through his old alma mater, McGi|l University and was posted as CHAPLAIN to the Princess Patricia’s Canadian Light Infantry in FRANCE. At the battle of PASSCHENDALE, France Reverend Walter Livingston lost his life on October 30, 1917 at the age of 35.

His name is memorialized on the Menin Gate Cemetery in YPRES, BELGIUM.